Our second day’s ride – from Gadsden, Al, to Rockmart, Ga, – gave us a little bit of everything though we remained enveloped in a soggy miasma. Again we set out before sun up, and again there was wind and it was in our face, which offset its meagre cooling effect. Traffic was light as we crossed the Coosa river, and our trek eastward out of Gadsden was quiet and unhurried. Gradually the distance between houses grew until they yielded to trailer homes slumped at the edge of scraggly woods.

Where we live, West Virginia is often the butt of jokes about illiterate bumpkins – it is the foil for us in our version of the regional superiority contest between city sophisticates and plain country folk. As we rode into the backwoods of northeastern Alabama, it came to mind that within DC’s African-American community, “bama” serves as the same sort of positional contrast. But no matter what your comedic target may be, rural poverty just ain’t funny when you find yourself in the midst of it. I’m not talking about Dorothea Lange-type images of destitution; what we were seeing was more relative than absolute poverty. And yet for the “greatest country in the world” that is bad enough. There are legions of overlooked, forgotten and ignored fellow citizens trapped in dire circumstances across the land – we are fortunate that our ideologies are up to the task of assuring us that life is not fair, the poor will always be with us and the safety net must not become a hammock.

As I contemplated this political economy of moral estrangement, we inevitably found ourselves heading down what Jeanne and Randolph, our cycling friends and neighbors, call “bad dog road.” Doesn’t matter if you’re a little tired or if you’re facing an uphill climb, you will find the energy and the motivation to get your ass down the road when a mean ol’ barking dog is chasing you. That is an “all bets are off” type situation where you just need to be gone. We probably had a good 10 miles of country road to get through when the first dog started after us. Initially, it was an “oh yeah” moment that reminded me of when Roger and I encountered our first lightning storm in our cross-country ride. Given the circumstances, it was inevitable in both cases that such an occasion would arise but until that point we had been blissfully proceeding without a concern or a plan. For Rachael and me, all we could do was react on the fly and that turned out to involve a primal scream sonic defense and an unanticipated benefactor.

Who knew – my safe word turned out to be “NOOOO” delivered in the manner of Captain Kirk’s definitive “KHAAAN!”

There is a curious asymmetry between the situations of the lead and the tail rider that I think favors the person out front. Generally, you are the dog’s first target, but if it is some distance away, your escape vector looks pretty good. It’s like the old joke about not needing to outrun the bear. There is always the chance that the dog has the angle on you, but it’s got to be the case that the secondary target is usually in a more exposed situation. So for the first couple of rounds, Rachael had the worst of it. There weren’t any really close calls, but you don’t know that until you’ve gotten away. For a good stretch of bad dog road, she took full advantage of her impressive vocal projection and got schooled in the flight response; happily, fight never came into play.

And then, I saw a dog retreating in the distance. As I came up toward it, the dog repeatedly withdrew down the road. So I cycled back to where Rachael was and suggested we do this one together. It wasn’t clear what the dog was up to, and it seemed only prudent to find out once. Well, it turned out that this was one friendly dog. She was clean and had a collar and ended up running along beside us wagging her tail as if happy to have the company. We tried to get her to go off back home, but she stayed with us for a good distance until she ended up running interference through a final canine cordon. She didn’t snarl at the other dogs but kept herself between them and us until we were well down the road out of the holler and back toward the highway.

Friendly dog notwithstanding, this experience convinced us we would try the highway for the next six miles rather than dropping back into the woods after just one mile on the fast-moving road. Fortunately, it was still early Sunday morning, and though the speed limit was 55 mph, there were two lanes so most cars moved over when they passed us. We set a brisk pace (well, as brisk as riding with panniers will allow) and once we reached the Piedmont cutoff a gentle exultation stole over us. All that had come before was as no more – the early rising, the sauna-like conditions, the dogs and the high-speed traffic – none of it mattered as we were now coasting toward the little town where we would pick up the bike trail that would take us the rest of the day’s ride. Along the way we came across this incongruous fella: 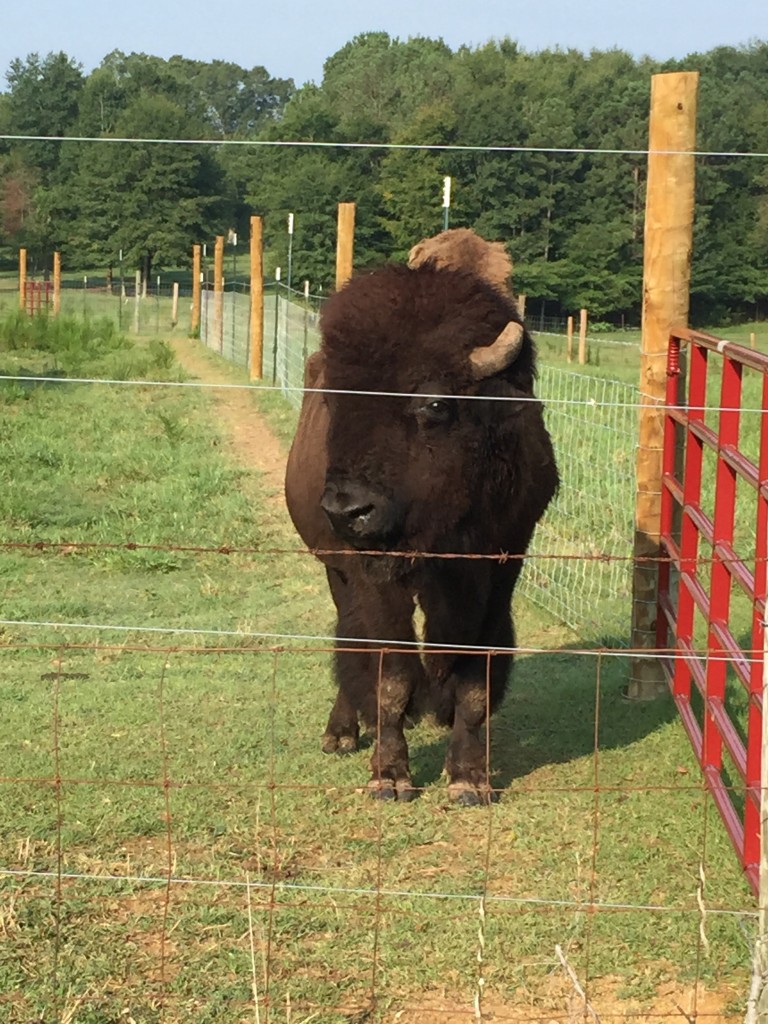 Once we got to Piedmont, we lollygagged about taking some pictures and refueling at the local supermarket. Unlike in Gadsden, the people we talked to were nonplussed about what we were up to as the proximity of the Chief Ladiga trail ensured that the locals were accustomed to weirdly attired strangers roaming the aisles in search of electrolytes. 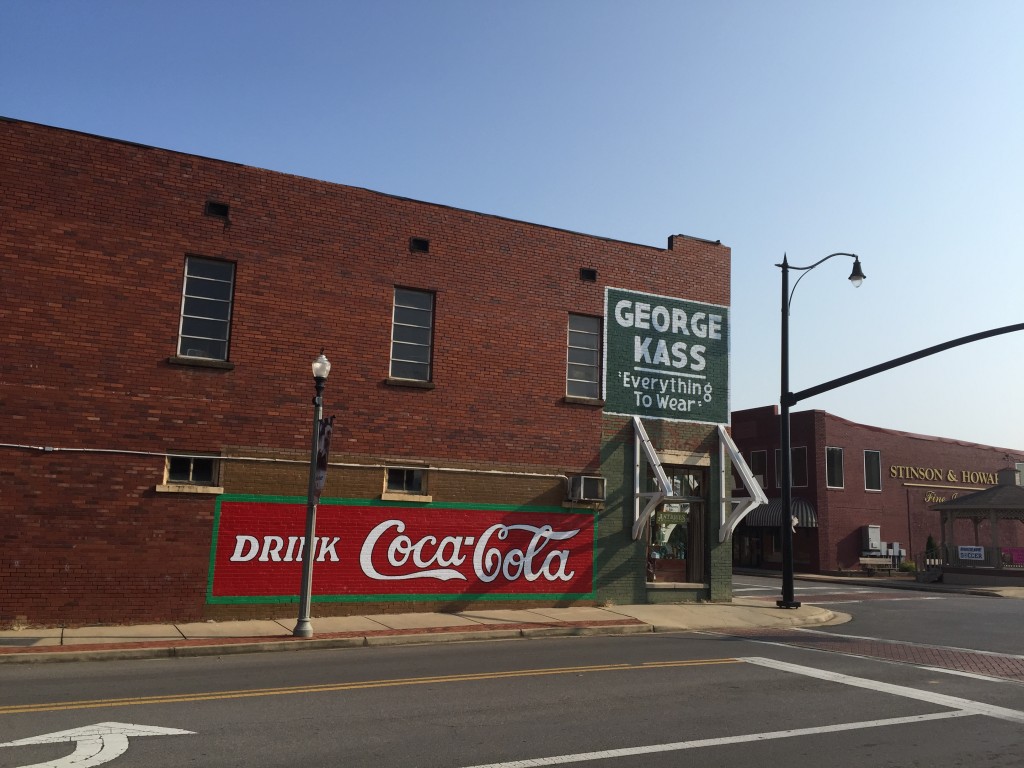 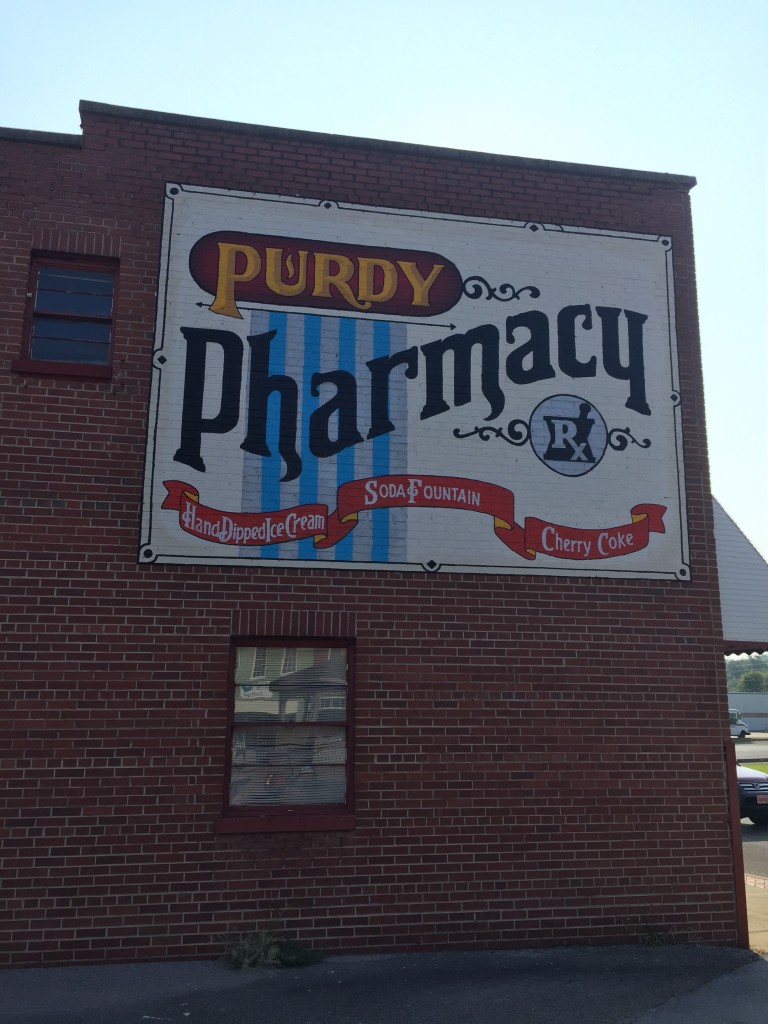 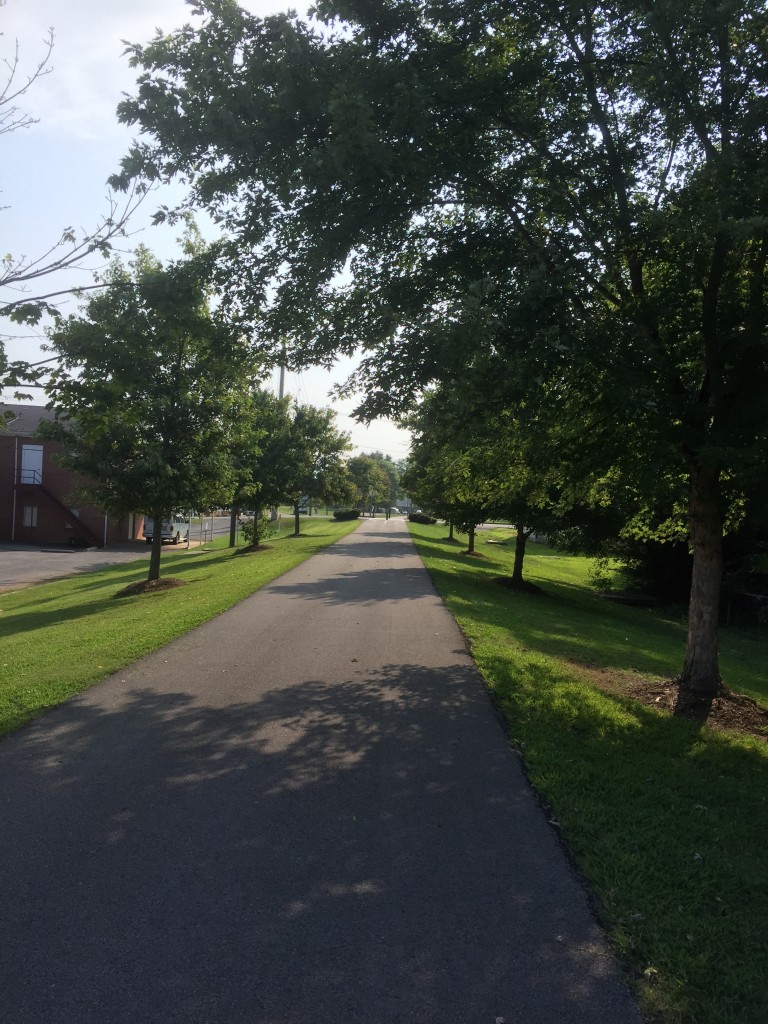 Once out on the trail, all was solitude and shade. The Chief Ladiga trail took us to the state line, where we picked up the Silver Comet trail and headed into Rockmart and our next rendevzous with a swimming pool. 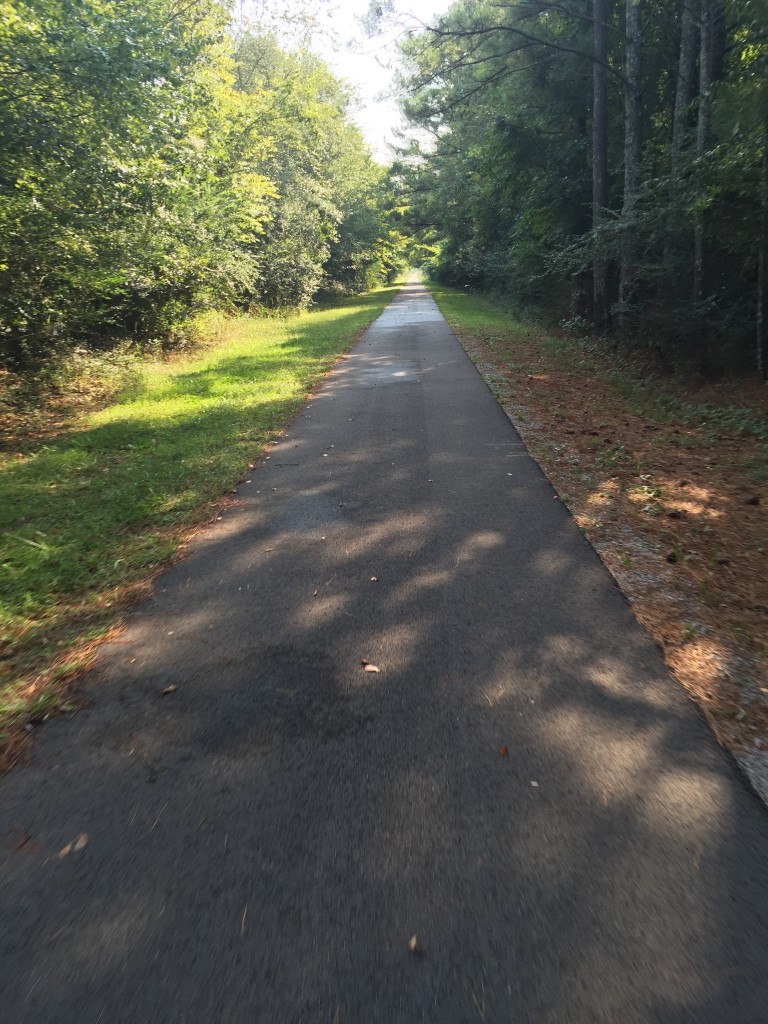 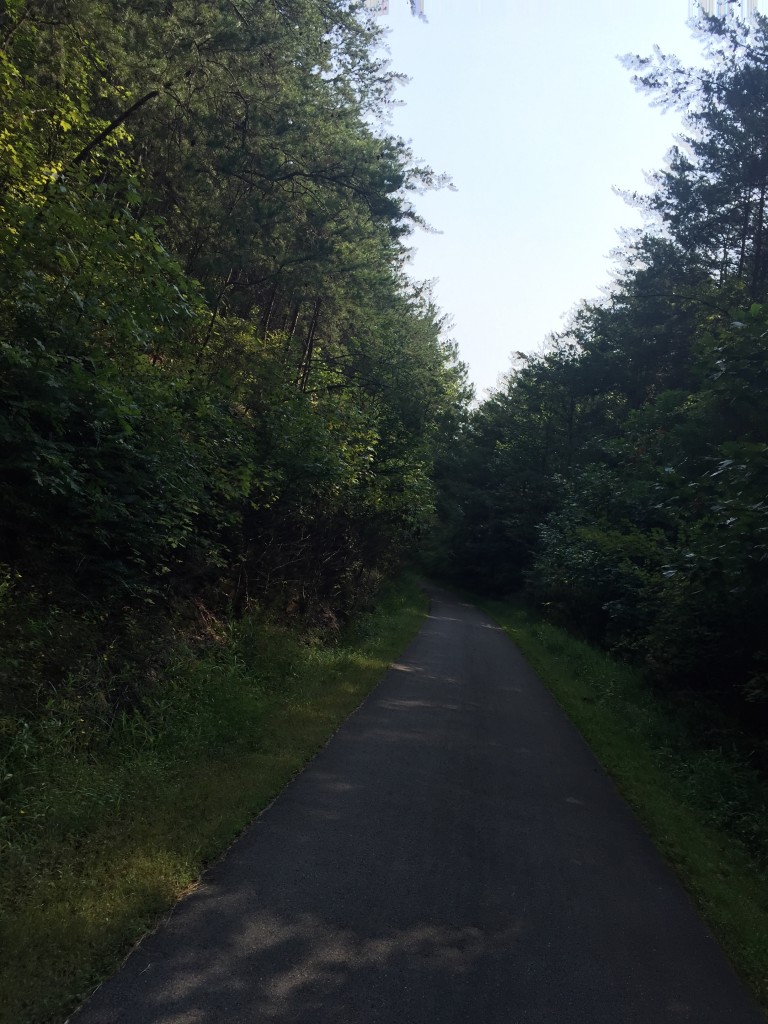 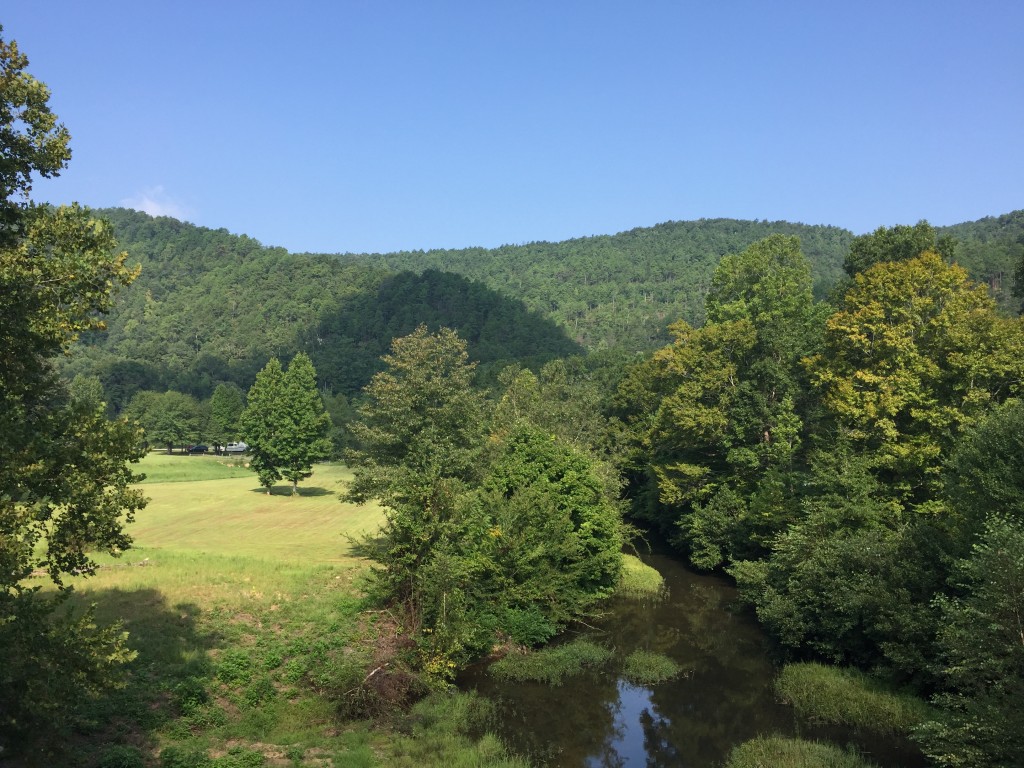 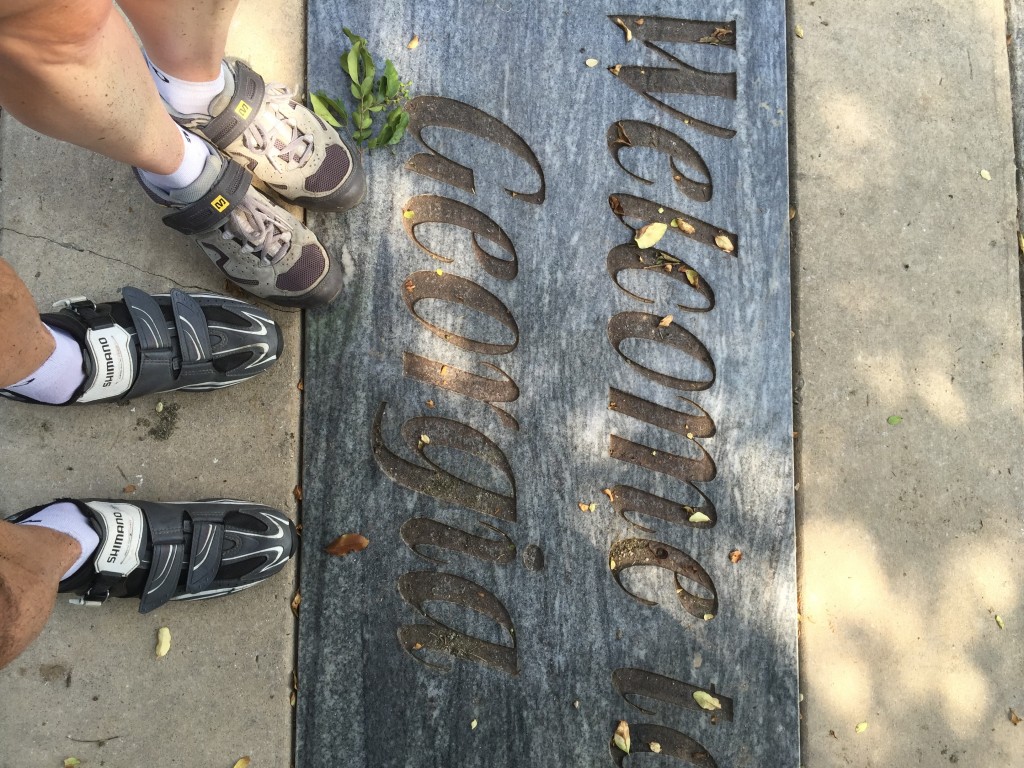 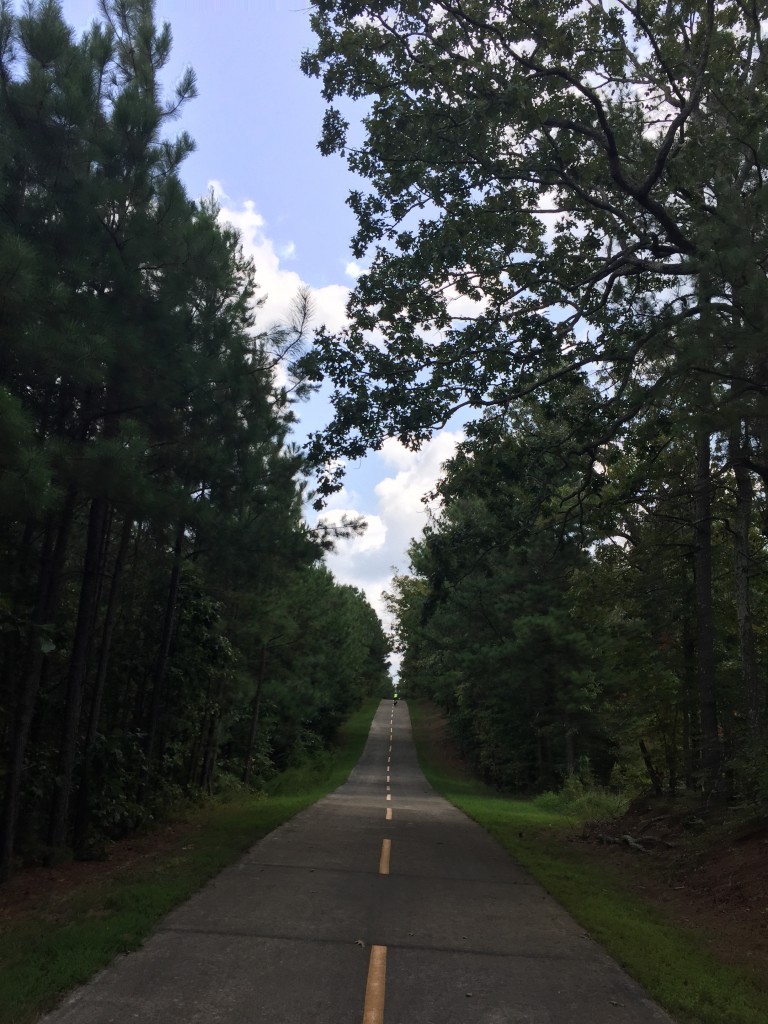