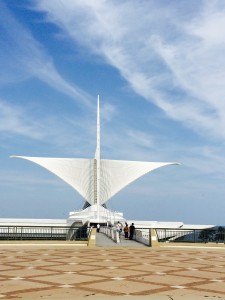 Interesting day yesterday – we got into Milwaukee early in the morning with plenty of time to kill after picking up rental bikes for the week-long ride we begin today, and so since it was the first Thursday of the month we went to the art museum for free to see the Pompidou Centre’s Kandinsky retrospective. 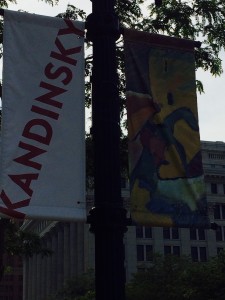 This turned out to be an incongruous thing to do. Flush with excitement about starting the ride – getting out of the city and into the countryside for a week – being in a museum was dislocating. Where mentally we had already leapt into an imagined future – our sense of present time consciousness had already been polarized by the near future to such an extent that the actual present seemed merely something to get through – now we were in a situation that requested a deepening of focus and awareness. All in all, quite a phenomenological transformation.

Happily for me (less so for Rachael), I am quite fond of Kandinsky’s early- and middle-period abstract works and could answer the call and experience again the impassioned synesthesia of those radical efforts to render inner necessity visible.

Rachael found her reconciliation in another exhibition, this one a group showing of contemporary photographs of Milwaukee that ranged in focus from Todd Browningesque head shots of people at the State Fair to the alienating effects of the decaying built environment.

Thus reinvigorated, we set off on as much of a walking tour that my ailing knee could manage. In practice, this turned out to be a watering hole-by-watering hole ramble about the Third Ward that had us finishing up with a glass of wine in the Public Market and nodding in agreement with the passing comment of a guy telling his friend, “See here in Wisconsin we really like our alcohol.”