As Rachael and I continue to train for Climate Ride Northeast (Bar Harbor to Boston, September 17-21), we are going to take advantage of her need to be in Atlanta after Labor Day to spend the holiday weekend biking from Birmingham to the A. Our three-day, 180-mile journey will take us to Gadsden and Rockmart before we roll up to some fine midtown hotel on Monday afternoon. About half the time we will be on rails-to-trails – part of the Chief Ladiga Trail in Alabama and then the entirety of the Silver Comet Trail in Georgia. Should be a pretty fun trip except it’s still going to be summertime in the Deep South.

The wisdom of the Internet (well, one guy’s blog) says we should avoid riding between noon and 4 pm, which is probably pretty good advice though we’re not likely to follow it to the letter. Instead, our plan will be to get up while it is still dark and set out just as first light is breaking. This should get us out of Birmingham Saturday morning without much concern about traffic, but it does mean we’ll have to have some good lights with us. Besides getting Rachael up at that hour, we’re going to have a problem with breakfast, and more importantly, coffee. My friend Roger (who I biked across country with) recently wrote about his solution during a solo ride from Manhattan to Cape Cod. He got a cup of coffee the night before and then reheated it in the microwave in his room. Not great but certainly beats not having any; definitely will keep that in mind – especially if there is no in-room coffeemaker.

Final preliminary note, we are taking our folding bikes, which we will also ride for Climate Ride. Rachael has a Bike Friday and I have a Tern. Both of them pack into a regulation-size suitcase and fly for free on Southwest. Rachael’s bike is already packed up and ready to go; my Tern has front and back racks, which means I’ll be carrying the panniers. 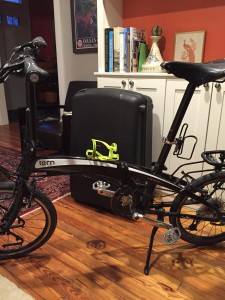 That’s it for now, but there will be much more to come.