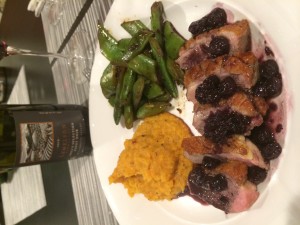 So Rohan duck breast with blueberry sauce, mashed sweet potatoes (with a really nice star anise-infused vegetable stock) and sauteed romano beans; not bad for a Thursday night. I think I cooked the duck just a bit past where it really should have been, but the 2012 Lemelson Pinot Noir made up for the lapse. The process of cooking a duck breast is quite simple – just score the breast in a cross-hatch pattern so the fat will render in the pan and then finish in the oven. The flavor of the Rohan duck is more pronounced – a deeper, slightly gamey and more ducky taste than the standard Pekin bird. Is it worth the extra money? I guess it depends; few people make duck very often so it’s already sort of a special occasion kind of thing and if you use it all – render the fat and make stock – the $4.49/lb price tag doesn’t seem too bad. I’ll wait until I do up the legs and the wings to render a final verdict.

Here’s how the breasts got from saute pan to dinner plate: 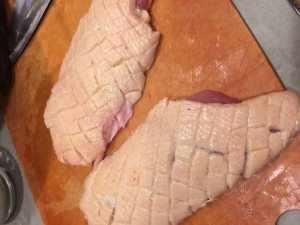 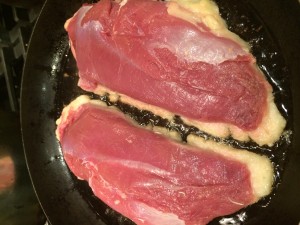 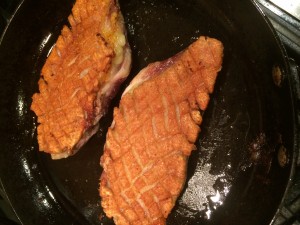 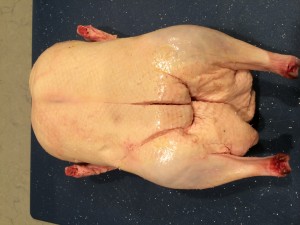 There’s a new breed of duck in the market thanks to the folks at D’Artagnan. Called a Rohan (presumably to bring to mind the French Rouen duck), it is a cross between a Mallard and a Pekin duck. So the other day I biked up to Union Market where Harvey’s Market had them on sale for the not-bargain but not-bad price of $4.49 a pound. I didn’t want to roast the whole thing (there are only two of us) so I set about carving it up.
The first thing I discovered is this duck had what seemed to be an extremely long neck. Here it is protruding from the body like something out of Alien. 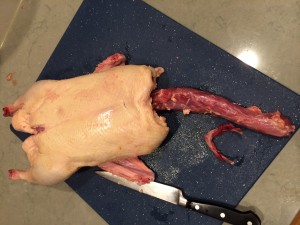 That’s the wishbone you can see beside it. If you want to carve up any bird, it’s a good idea to cut the wishbone out first to make removal of the breasts much easier. See how long the neck is? 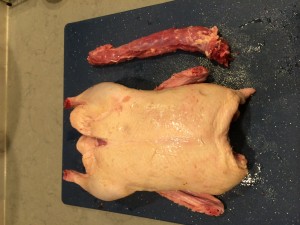 Removal of the legs is pretty straightforward. Similar to a chicken, you just cut through the skin down to the leg joint and then twist the leg to expose the joint and tendon that attaches the thigh to the body. A quick cut through the tendon and a curve around the bone and you’re home free. The wings always give me a bit of trouble as I find it harder to locate the joint so there’s always a bit of slicing and hacking that goes on. 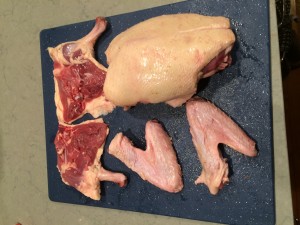 Once that’s done, you’re left with a very nice looking breast, which I considered roasting but decided against because I wanted to use the carcass to make stock. At $4.49 a pound, I figured I’d take advantage of everything I could. So this next operation is a little like doing an autopsy (or so I imagine). This photo is unfortunately a bit blurry, but basically you cut down along the breast bone and then work your knife along the bone to separate the breast. 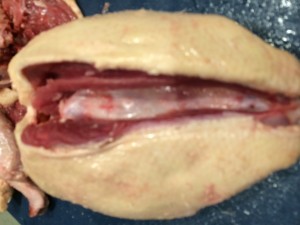 Because you’ve already removed the wishbone, the breast comes right off. 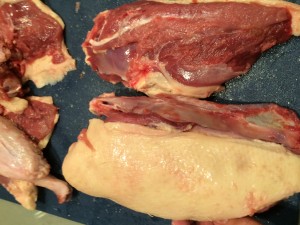 Once more, along the other side (which I always find to be a bit trickier because you’re doing it wrong way around) and you’re done. 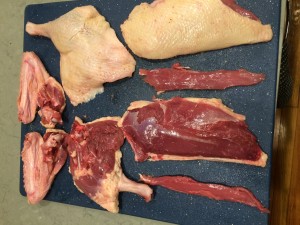 Those little strips of flesh are the tenderloins from the breast; once you remove the tendons that run down their length, you can saute them up for the chef!

Now while I render the fat and make stock from the carcass, I have to decide whether to cook the breasts or the legs tonight. Guess I’ll have to see what sort of wine is on hand!