So, flush with our refi cash, we journeyed into the unknown-to-us realm of fabulous kitchen remodeling. Ha! At each and every turn, there was someone ready to be helpful and ready to get his or her cut. Before going any further, I have to exempt our architect (a veritable Virgil without whom we would surely have foundered) and our contractor (someone with whom we have worked before and highly recommend). But for the rest of it – what a racket!

I don’t have any data on this, but it seems probable that the kitchen renovation industry cyclically depends on the mortgage refinance business. There are obviously plenty of people with the wealth to self finance such projects, and plenty of other people who take a long-term, gradual approach to remodeling. But the “all-in” crowd probably has a pretty fair percentage of people who are coming straight from refinance into the showroom. “Welcome, welcome; step right up!”

A quick aside – we call our economic system free-market capitalism, which of course it is not and nor has it ever been and nor will it ever be. The “free market” shibboleth goes down easily enough as an ideological contrast to Communism but why we can’t get beyond that now is a bit of a mystery – it could be one positive thing that the libertarians could help accomplish. But the capitalism descriptor is a bit more slippery. Its origins from say Adam Smith forward are straightforward enough, but it seems legitimate to wonder whether the pervasive spread of debt and the increasingly esoteric metastasization of finance has so changed our political system that our continuing fealty to capital prevents us from fully recognizing our enormous dependence on debt.

Case in point, the mafia-like structure of the refinance business. On one side is our lucky couple whose home has appreciated allowing them to get access to pots of lovely money. On the other, we have the various dons, captains and made men of refinance each of whom first needs to get a taste. Our couple does not want to pay the vig, but this is Chinatown debt finance.

Appreciation has seemingly created value out of nothing, or more precisely, while the house’s use value has not changed, its exchange value has gone up. Since this is the case, the couple can now borrow more money from the bank – add to their mortgage debt – while lowering their debt-to-equity ratio from that of the original mortgage. Our couple has leveraged the new value of their house giving them both more debt and a fistful of ready money that they did not have to work for. And that is the psychological key which is the basis of the grift. If anyone had to pay all the refinance fees out of their paycheck they would be pissed off and maybe some regulation (cough, Senator Warren) might cut into the mark up. But as in some sense it feels like found money, everybody gets their take as the price of doing business, and our lucky couple exits the refi office properly schooled in getting fleeced. Now, back to the showroom!

If it is true that a fair percentage of all-in kitchen renovations are paid for with cash-out refinancing, it seems arguable that given its origins this sluice of debt sets an artificially high floor for the cost of such projects. At least that is the only explanation I can come up with for the cost of kitchen cabinets. (I know Ikea is the lower-cost alternative, but if capitalism, status anxiety and narcissism have taught us anything it is how unattractive it is to settle for something we can afford.) Perhaps we were simply naïve, but we were certainly unprepared for the cost of a few pretty wooden boxes.

How the Republicans Made Our Kitchen Renovation Possible

Before I get back to posting more “thrilling-to-us” photos of the work being done on the kitchen, I think it’s worth saying a few words about the curious context of this project. Kitchens are expensive! If, as we did, you start with an architect and then find a reasonable and reliable contractor for the demolition and installation, pick out contemporary cabinets, tile and countertops, sign up for new appliances, fiddle about with lighting and floor refinishing and choose a new sink and faucet, you will end up on the wrong side of $50K at a speed that shatters your normal money frame of reference. Typically, other purchases on this scale – car, house, etc. – are financed by debt rather than income or savings. Since a new kitchen was never such a priority that we would contemplate taking out a home equity line of credit, we lived with a state of affairs that was ever less genteel and ever more decline until we reached the point where “use, decay and obsolescence” forced our hand.

And herein we get to the title of this post. The cataclysm of abrupt financial climate change left houses underwater and dried up access to refinancing. Although some sectors of the economy and the housing market have since improved, in much of the country 2013 was not a great time to be thinking about refinancing your house to pay for a major kitchen renovation. Unless that is you happened to live in Washington DC and bought your house during the time the Financial Control Board ruled the city’s fiscal affairs. If that was the case, you were welcomed back to the casino like a whale.

Since 2001, when DC regained its (congressionally limited) financial autonomy, the city benefited from the same social and economic forces that spurred an urban revival across the country in the run-up to the Great Recession – a drop in the crime rate (likely due to reduced childhood exposure to lead beginning in the early 1970s), a generational attitudinal shift in favor of urban living and the easy money real estate bubble. But when the latter burst, DC retained significant advantages that other locales did not.

The signal accomplishments of Clintonian neoliberalism – financial deregulation and the embrace of leveraging, a return to budgetary surplus and “ending welfare as we know it” – set the stage for an epic Republican bacchanal of fraud and chicanery, reckless deficit spending and a “kicking the poors” mentality. The Afghanistan and Iraq wars might have had limited effects on the rest of the country, but they kickstarted DC into high gear. Just as the finance, real estate and insurance industries were redefining their role in the real economy, the Global War on Terror reasserted Washington’s primacy within the nation. Taken together, these developments wrought the largest-scale transformation of the nation’s capital since WWII.

So when the party ended for the rest of the country and the hangover set in,  “federal” DC put the tab for the top-shelf booze on the nation’s credit card and kept right on going. As a result, construction is going on all over the city, downtown residences must be at a modern historic high and housing prices have pushed first-time buyers out to neighborhoods whose names (when not just made up) and boundaries were not widely known just a few years ago. The flip side of conservative antipathy to government and liberal elites turns out to be a revolving-door embrace of government contractors, lobbyists and ideological hustlers and grifters. (The election and reelection of America’s first black president has only intensified the fervor in the true believers’ redoubt; in the absence of political courage, it seems we must rely on demography  to set a new course.)

The largely recession-proof local economy (excepting the underclass as always) fostered by Republican rule through most of the 2000s reflected a Bizarro world reality in which the Washington that was skimming its take off the nation’s taxpayers was not the meddling government and its bureaucratic henchmen but the new buccaneers of privatization and deregulation stuffing their coffers with government contracts. Retooling DC for the emerging rentier class had positive spillover effects in keeping housing values sound and creating the basis for a more diversified economy of restaurants, bars and retail in previously neglected parts of the city.

The final contribution that Republicans made to ensuring that we could embark upon our kitchen renovation came from the party’s opposition to stimulating economic growth after Obama was elected. Urban revival and real estate fraud had pushed up housing prices and driven home equity appreciation to heights that were unsustainable in other parts of the country, but Republican rule during the 2000s set a floor in DC that was unparalleled. Recalcitrance to stimulus ensured the continuation of low interest rates as the nation’s economy struggled fitfully to escape its liquidity trap. All of which meant that by the time our kitchen was ready for the dustbin, we had ample equity to draw upon through a lower-interest rate refinance.

Next installment in this series: kitchen cabinets wtf?

Kitchen Renovation with a Side of Political Economy

So our long-overdue kitchen renovation has begun. We have been in the house for more than 15 years without making any major updates so the project is a complete redo – demolition has already taken the old kitchen down to the studs and floorboards. I’ll be posting pictures of periodic updates, but as we have decamped to Shirlington, VA, I don’t expect to be back more than once a week or so.

In addition to a pictorial record, I’ll also be tossing in the occasional big-picture musing as befits the “arc” conceit of this blog. Rachael and I have stumbled into a world unknown to us – the organized scam of the wallet-lifting kitchen cabinet industry. More on that in another post as well as some thoughts about how the systematic looting of the state by the revolutionary conservative ascendancy has made this project possible for us via increased demand for housing in Washington DC, appreciation of home values and low, low interest rates. It turns out that refinance is a conservative stimulus policy!

But first, let’s go back to the beginning. Our kitchen, as old and cramped and dingy as it was, nevertheless was quite suitable for its basic purpose – the storage, preparation and cooking of food. I saw no reason to make any changes, but there was one small and growing problem: 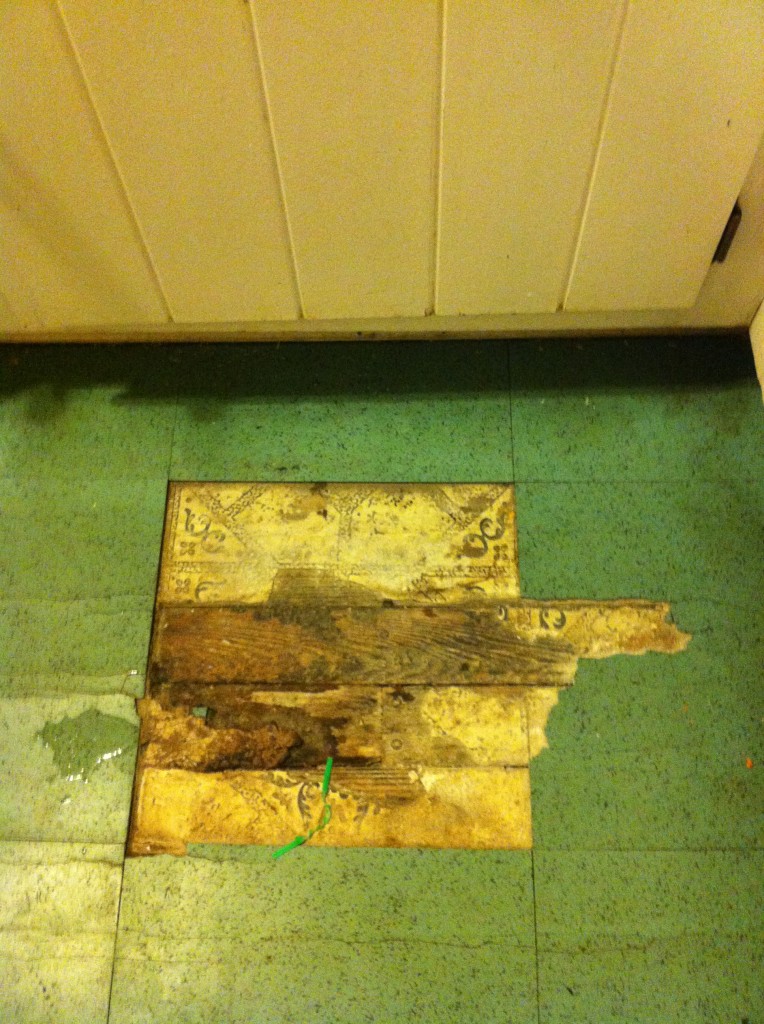 This was the loose thread that unraveled the entire kitchen.
Anyone reading this probably has firsthand knowledge about how crammed full of stuff the shelves, cabinets and refrigerator were. Faced with the need to get everything out of the kitchen, I discovered sights that I had never seen before: 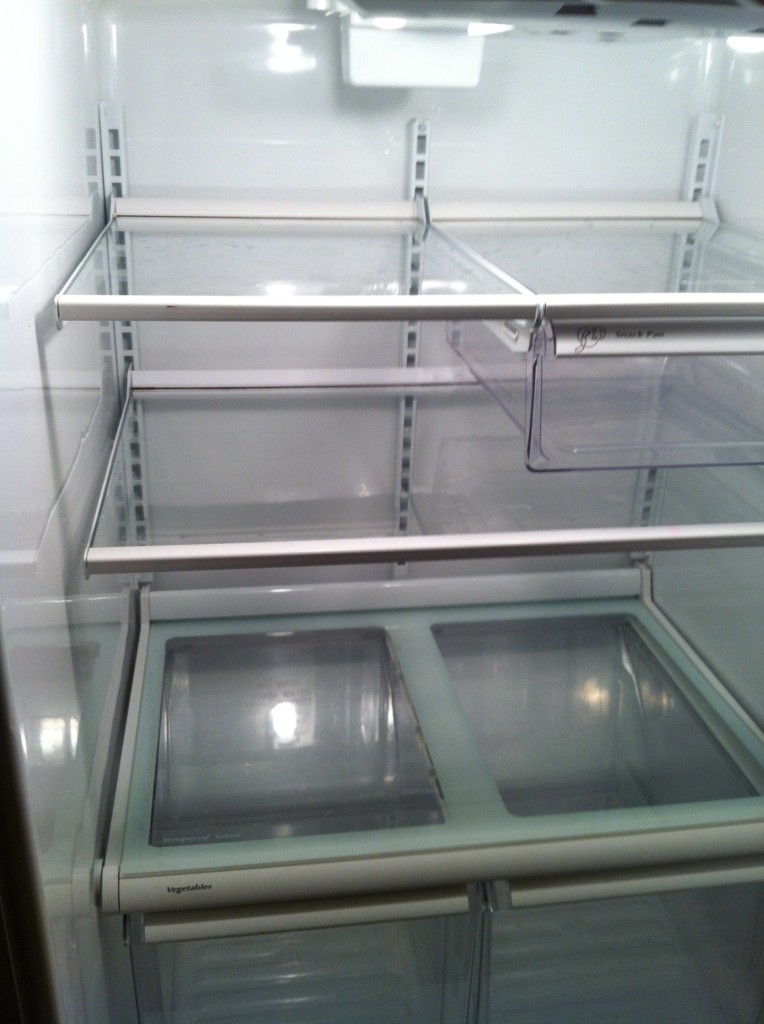 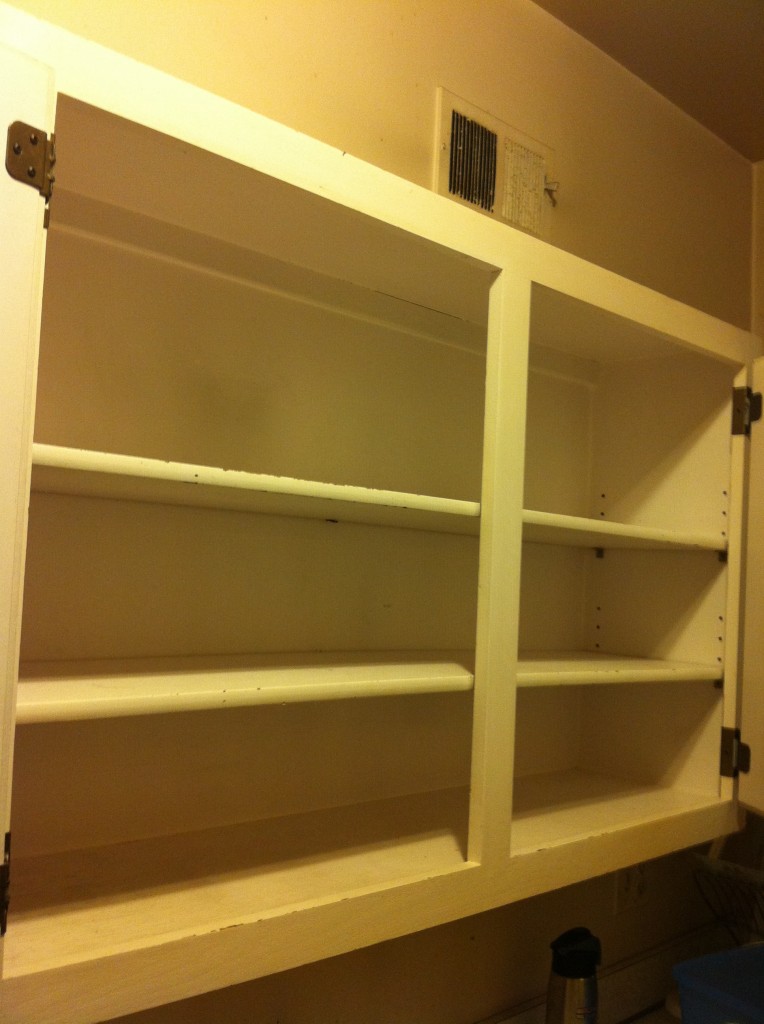 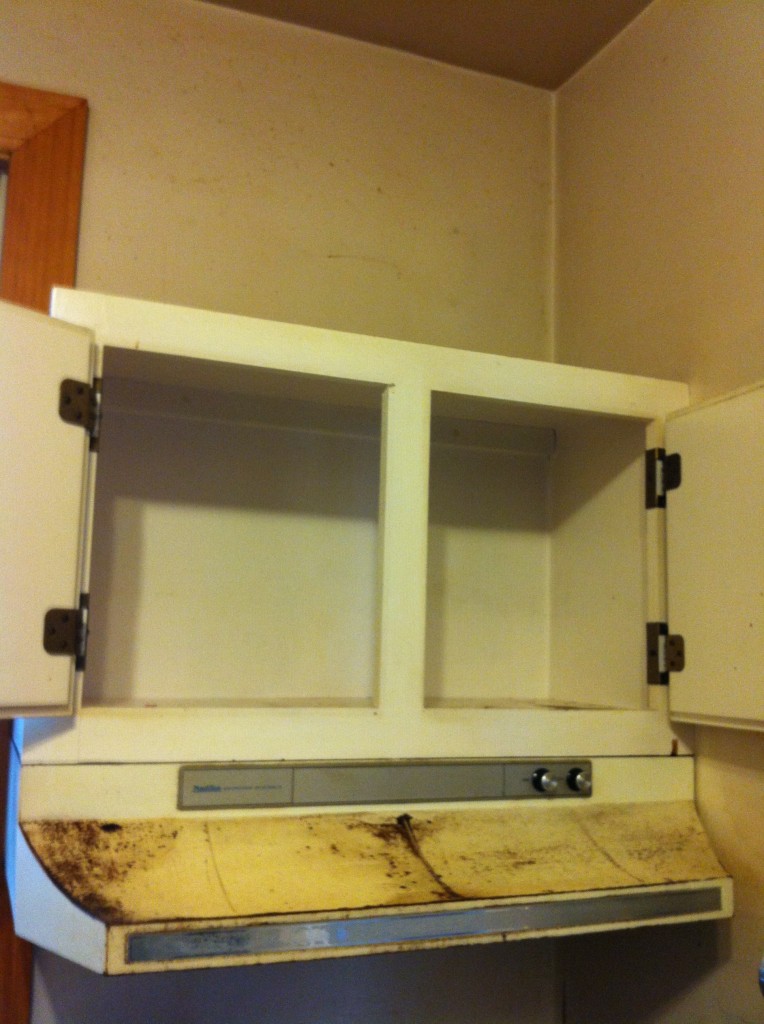 The hood on the old stove is a good example of how inured one can become to the state of things in one’s own house that nonetheless would be appalling somewhere else (I trust Rachael might wish to edit the pronouns in that sentence).
But enough with memorializing past glories – here’s how the kitchen looked after the first day of demolition: 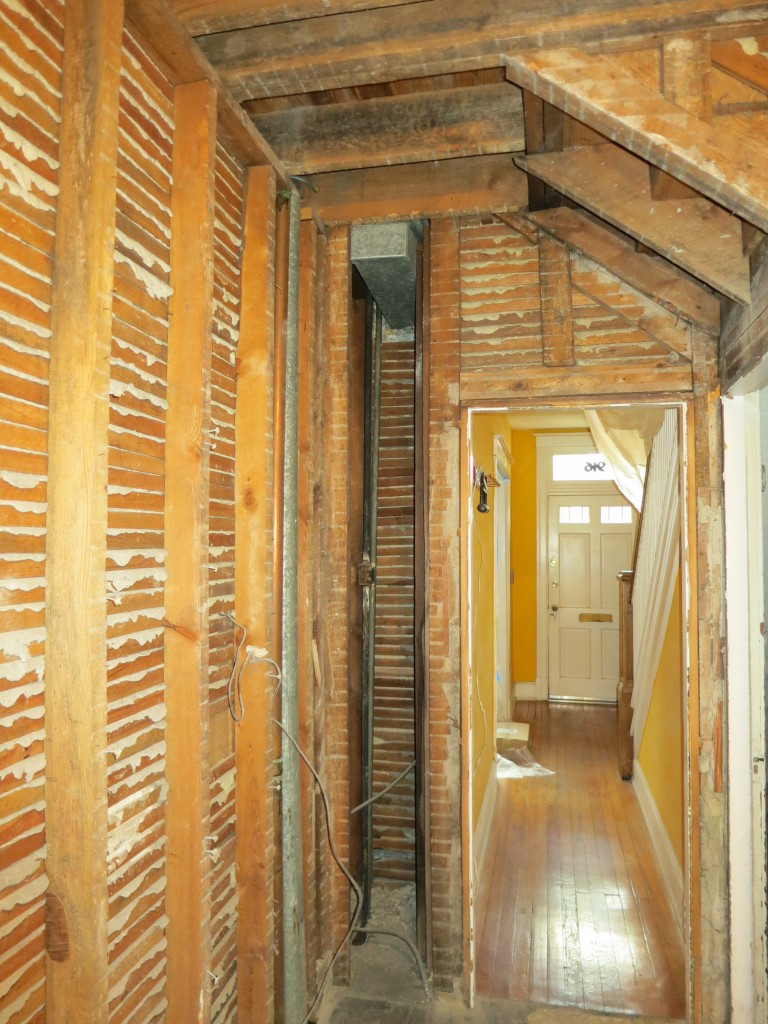 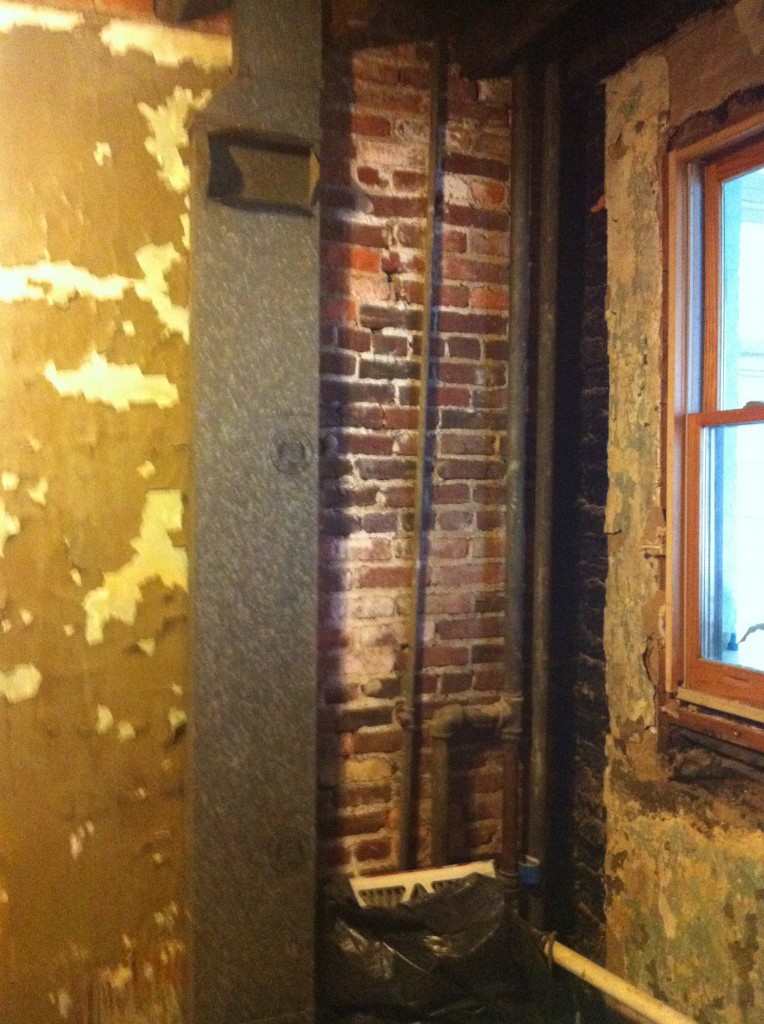 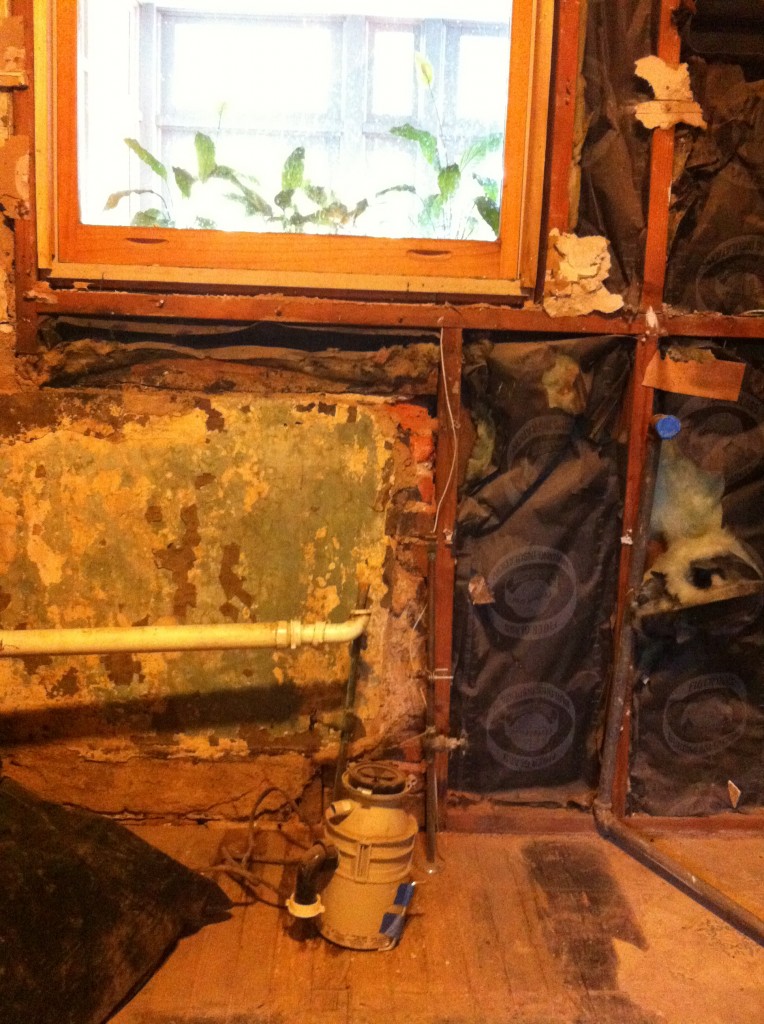 So much more to come…
Read More