While it’s still mostly too cold to do much biking outdoors, I’ve been either going to the gym or using Rachael’s spinning bike here at home. Of late, while I’m on the latter, I’ve been “accessing” videos of the UK series Life on Mars (it is not humanly possible to ride a spinning bike without some form of distraction). John Simm plays a Manchester police officer who gets hit by a car and wakes up in 1973 with his memory intact and wondering whether he’s “mad, in a coma or back in time.”

I think the “back in time” feeling I got when I thought about making tonight’s dinner is partly due to this recent TV viewing. The salad contains farro, onions, kale, garlic, sweet potatoes, walnuts and pomegranate arils. While it is chockfull of superfoods, I wondered about how it would all come together. It reminded me of old vegetarian recipes out of the 1970s where what the dish contained was more important than how it tasted.

Happily, times have changed. Farro is a great improvement over the brown rice that would have been used; quickly sautéing the kale preserves flavor, texture and visual appeal; roasting chunks of sweet potato with oil, salt and cumin ups their taste; and adding walnuts and pomegranate arils helps pull everything together in a bright and tasty way. Delicious! 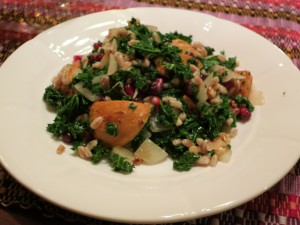 So we got to March and had a great time at a dinner party at a friend’s house along with everyone else who had been at Jan. 31st’s Carne Vale. It’s a fun group of people, our host made her fabulous vegetarian lasagna and a great time was had by all (I do hope the wine stains come out of the tablecloth and deeply regret the breaking of a very nice wine glass).

There was a tasty tomatoey pot roast over polenta that (except for the bacon our generous and thoughtful friend gave us in the morning) was our first substantial reacquaintance with animal flesh, which we quite enjoyed. But the next day, after a nice afternoon-into-evening visit with a convalescing friend (and drinking a bit of wine), we made what turned out to be a mistake in getting carryout from a newish local burrito joint across the street from Gallaudet University.

It was decent cheap late-night college food, but after a month of vegetarian fare, it was not a wise choice by us. We ate more than we probably should have of the too-stuffed soft bland carnitas wraps and spent a fair chunk of Sunday in the queasy uneasy realization that we had jumped back on the meat wagon too soon.

Unfortunately, what that meant was that we decided to forego the Sunday early evening outing to a Korean BBQ joint with most of our compatriots from Friday night’s end of Frugal February celebration. We were just not ready to eat meat and more meat, which was kind of surprising because it’s not how we ended up after last year’s Frugal February.

So we stayed home, and I made some French onion soup, which was incredibly good. The key is to repeatedly deglaze the cream-onion reduction in white wine until everything is deeply brown and flavorful. 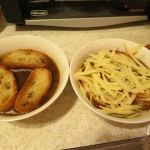 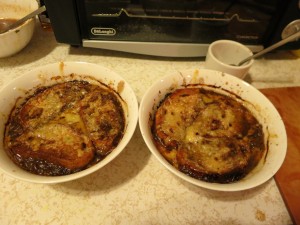